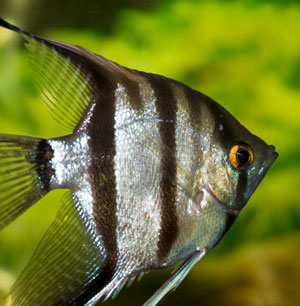 The long backward flowing fins of the angel fish give the fish the appearance of a butterfly or bird with outspread wings, as it gracefully swims among the plants.

The silver body, overcast with blue, has numerous specks, not unlike small freckles, on the sides. Evenly spaced black bars stripe the body, the initial passing via the eye, which is red, and also the last is on the tail. The ventral fins of the angel are long and thin, and curve back gracefully under the fish. The dark bars, which are nature’s camouflage, practically disappear when they’re frightened.

Unlike most Cichlids they’re great community fish, and they don’t worry the plants. They’ll, needless to say, make a meal of any very small fish if given the chance.

Occasionally angel fish lose their appetite for no apparent reason. It is advisable when this occurs to try a change of diet. Try such foods as daphnia, chopped earthworm, white worm, and mosquito larvae. If this fails, a change of water might induce them to eat.

Sexing is most challenging. There are a number of techniques, but most of them are unreliable. Prob-ably the very best indication is the appearance of the breeding tube just prior to spawning. This is much more pointed in the male and is carried at a much more forward angle. Specialists can tell by the shape of the body, but it is very challenging for the layman to do so. It might be judged by the forward component of the body between the long ventrals and also the beginning of the anal fins. In the female, nevertheless, this outline appears longer and straighter than in the male of the species.

Breeding habits are just a little various from the standard description. The young aren’t placed on stones or in depressions in the sand, but remain stuck to the plants on which they had been hatched. Lots of broad-leafed plants, like Vallisneria or Sagittaria should be put into the breeding tank for the eggs, which are adhesive and are laid on these strong plants.

A bamboo cane or glass tube, the inside of which has been coloured to make it opaque, stuck into the sand just slightly off the vertical might also be utilized as an artificial spawning ground. Most professional breeders use this technique, as the eggs are then effortlessly removed to an additional tank for rearing the fry.

It is a issue as to regardless of whether the parents should be removed instantly after a spawning, even though it is certainly safer. Although it is a pretty sight to see parents and young together, there is a fifty-fifty chance of them being eaten.

During the period when the young are attached to the leaf, they’re continually picked up in the mouth of their parents, held for a couple of moments, and then sprayed on to an additional leaf. The reason for this appears to be cleanliness. Should you transplant the young to an additional tank at this stage, mild aeration helps to produce conditions of strict cleanliness.

After hatching, the fry generally turn out to be totally free swimmers in about two days, when micro-worm and sifted daphnia should be given.