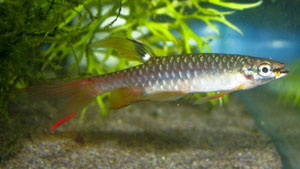 The threadlike fish is the most unusual fish, unusual if only for its peculiar breeding habits.

Even though not an outstanding fish with regard to colour, it has a rather nice body shape, and attractive fins. The main body colouring is an olive-brown, with darker markings on the scale edges and around the mouth. Both ventral and anal fins are a suffused red, and also the exact same colour is also present on the lower fork of the caudal fin. The dorsal fin differs according to the sex; in the female it shows a red spot, but in the male there is a white spot contrasted by a dark spot instantly in front of it. Even though this species is a member of the Gharacin family, there’s no adipose fin.

Nature has supplied numerous ingenious methods for the protection of her creatures when in the early stages of their existence. Copeina arnoldi is an example of the extremes to which a creature will go to make certain a measure of protection for safeguarding its offspring.

When he has discovered a suitable plant above the actual water surface, the male drives the female towards it, then they lock, or partially lock, their fins together and leap out of the water on to the plant leaf, where the eggs are deposited.

For aquarium breeding, put the pair offish into a tank about 24 inch x 12 inch x 12 inch. The water should be about 8-inch deep, and have a pH of 7 or slightly less. The temperature should be between 75° and 80°F. A piece of roughened glass or slate will substitute for the plant. Place this to ensure that it projects above the water level, the rough surface will permit the eggs to adhere.

Cover the aquarium with a sheet of glass. The absence of a suitable sloping piece of material rising out of the water might result in the fish trying to deposit their eggs on the glass cover, from which they’ll fall back into the aquarium and turn out to be lost.

If the fish are in condition, the act of spawning will take place as described above, the fish jumping about 2 inch out of the water. They adhere to the slate or glass for a couple of seconds during which from six to twelve eggs are laid and fertilised. The fish then fall back into the water. This operation is repeated until approximately 100 eggs are deposited. It is then advisable to remove the female.

The male will tend the eggs, keeping them moist by splashing them periodically with water. This he does by swimming under the eggs and splashing with his tail, causing the water to spurt upwards. When not really performing this operation, the male likes to hide; as a result it’ll be essential to offer a plant thicket at one end of the aquarium. When the eggs hatch, generally in about 3 days, the fry drop into the water. Remove the male.

It is as well to feed the adult fish on live foods like daphnia, chopped earthworm, and insect larvae to get them in breeding condition.