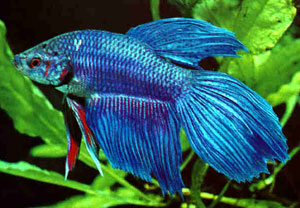 Siamese fighters are individualists; there’s no other aquarium fish fairly like them.

You are able to only really appreciate the beauty of this species when it is angry. A mirror placed on the side of the aquarium, so as to give the impression of an additional fish, causes an immediate fighting attitude, with gill plates ruffled and all of the fins stiffly erect. This is a truly fantastic sight.

‘Cornflower blue’ and ‘fiery red’ are the two main colours, but there are numerous colour variations in blue, green, and red, all with a metallic tint which is heightened when the fish is annoyed.

The fine fellow we know right now has been developed from comparatively drab forefathers, which had smaller fins along with a yellowish-brown body colouring with faint horizontal bands.

It is advisable to have only one male in a tank containing other fish, and if the tank is particu-larly big you might also add a female.

The fighters usually give the impression of good-natured indolence, preferring to lounge in a corner, or slowly cruise around the tank with eel-like movements.

You are able to identify sexes by the longer and much more pointed finnage of the male. This doesn’t turn out to be apparent until they’re about an inch in length, and at this stage you should rear the males in separate containers, but females might be left together.

The fighters are very adaptable and soon settle down in new surroundings. They take readily to dry foods, but they fare much better on daphnia along with a live diet.

Breeding follows the standard technique for bubble nesters, but it is rather an unreliable species simply because of its inborn aggressiveness. They breed at a temperature of 78°F.