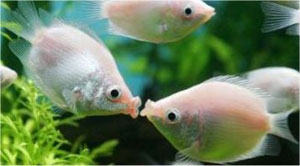 It is a typical human trait to credit animals, in this instance fish, with human reactions when their actions are comparable to human behaviour. As a result, when we find two fish lip to lip, they’re assumed to be kissing, hence the well-liked name for Helostoma temminck.

It is true that this species will probably be seen occasionally ‘kissing’ but it doesn’t mean that love is the motivation. It is, in reality, not component of the mating process, and also the true reason for this behaviour isn’t recognized. Nevertheless, it is an interesting exhibition.

The general body colour of kissing gourami is a light greenish blue, lightening to silver on the belly. The sides are marked with thin, horizontal, wavy stripes along with a dark bar crosses the tail root.

Kissing gourami is mainly a herbivorous species, as might be expected, and will eat dried foods, but it should also be fed with dried spinach and powdered oatmeal, and lots of algae should be supplied.

It is not a ready breeder and doesn’t construct the usual bubble nest. After the usual chasing, the pair embrace and also the female scatters between 20 and 50 eggs which float on the surface. This is repeated until between 350 and 2,000 eggs have been laid. As it is much more than likely that these will probably be eaten between every embrace, it is advisable to remove the eggs promptly and transfer them to a container floating in the exact same aquarium. Once the spawning is completed, the adults could be removed and also the eggs returned to their original house.

For breeding the temperature should be about 84° F and also the water preferably a minimum of 12 inch deep. The pH should be about 7.4 – 7.6. Eggs hatch in about 3 days.

Once the eggs hatch the issue of feeding the young fry presents itself. Small is recognized about the correct foods so this stage will prove to be largely experimental.

The average length of adults is about 5 inch, but they grow to twice this size in the wild.