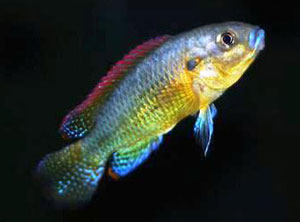 Egyptian mouthbreeder fish, from the land of the Pharaohs, is an example of the lengths to which nature will go to protect the young of certain species.

Fully grown specimens only reach a length of 2.5 inches and could be included in the community tank, but you should take care as they’re fairly likely to attack and kill smaller fish.

The breeding tank should be planted with lots of oxygenating plants, leaving lots of space between the plants. The male fans a depression in the sand into which the female lays her eggs, and these are fertilised as they fall down into the depression.

The perfect breeding temperature is 77°F. Any number between 20 and 200 might be dropped in one spawning, and then, contrary to the usual habits of the Cichlids, the female picks them up and carries them around in her mouth. (She really holds them in the buccal cavity.) The eggs aren’t only carried until they hatch, but until the fry absorb their yolk-sac, which they do in a matter of 14 to 15 days. During this period the female stolidly refuses to eat. This appears to be nature’s precaution against the eggs being swallowed.

Even after the young have reached the stage of totally free swimming, they’re liable to dart back into the protection of the female’s mouth, if they’re small sufficient, at the initial sign of danger.

Whilst the eggs are incubating, and even after they’re hatched, all mouthbreeders work their mouth in a peculiar chewing motion, which ensures a great circulation of water around the eggs.

The self-imposed task of the female takes its toll of her vitality, and after two weeks she looks a strange fish with a big head and emaciated body. Owing to the strain breeding puts upon her, it is not advisable to spawn too often. 3 times a year should be considered a maximum.

Remove the male after spawning. This is greatest done in semi-darkness, using a dark coloured net so as not to frighten or trigger the female to swallow her eggs. The female should be removed when the fry are strong sufficient, which is generally after 25 days. The fry should be fed with infusoria after 14 to 15 days, when the fry initial leave the mouth.