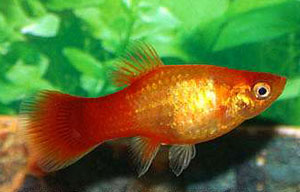 This species was initial collected and utilized for aquaria in the early 1930s, and has been a firm favourite ever since. It should not be confused with the P. maculatus.

The male isn’t smaller than the female. Both, when fully grown, attain a length of approximately 2 inch. It is in the colouring that the main distinction occurs. Females generally have a dull brownish green body with a dark zigzag line along the sides, and only the male boasts the gorgeous variegated colours which can combine yellow, blue, red, and green on one fish.

Breeding is simple, but it is not so simple to obtain a big proportion of excellently coloured males per brood. In an average hatching of, say, 30, only ten will probably be males, of which maybe only 3 will probably be well coloured, and in any case it’ll be eight to ten months prior to any real colour begins to show.

When selecting pairs for breeding, you should never select a little male-the bigger and brighter coloured, the much better. Females should be selected by their body colour-the deeper the much better.

Young are born four to five weeks after fertilisation, and with a fully grown female should number between sixty and eighty. Instead of the breeding trap, fine-leafed plants with some floating duckweed or riccia will make certain much better outcomes. Shallow water about 6 inch deep is advisable to ensure that fry can reach the surface effortlessly.

Given lots of room and ample great food, the young should grow to 1 inch in about twelve weeks.

It is interesting to note that up to eight broods could be the result of one fertilisation. These broods are born approximately once a month, but the water temperature has a bearing on the period. If the temperature is below 75° F, the intervening period will probably be longer.