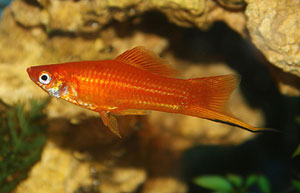 The swordtail is a great showy aquarium fish which is always lively and offers a continuous source of interest for its owners.

Originally the colouring was of a greenish hue, with a metallic green tail spike along with a distinct red line along the centre of the body, but by careful breeding and hybridising numerous colour variations are now accessible.

The red selection, obtained by hybridising with a red platy, has a deep orange body and long tail spike varying from orange to yellow, bordered with a thin black line.

Coloration in the green selection is especially pleasing, the green hue getting lighter as it approaches the underside of the body and also the red lateral marking being further enhanced by the addition of a yellowish band above it.

Albino swords are generally of a lightish colour and also the sword-like tail fin is also of a lighter hue than with other varieties, and like all true albinos the eyes are pink.

Sexing is simple for in addition to the gonopodium only the males have a long extension to their tails. This species has a tendency to bully, so for the sake of peace it is greatest to have only one sizeable male in the aquarium. They’re great jumpers, so don’t leave the aquarium uncovered otherwise they’re likely to be discovered on the floor next morning.

They’re fond of algae, and it is advisable to have some accessible even if it means scraping it off the glass of an additional tank.

Care should be taken not to chill the Ash as this frequently has a lasting effect with this species. Breeding temperature is 80° F. The number of young per female is in the region of 100 to 150, providing the female is big.