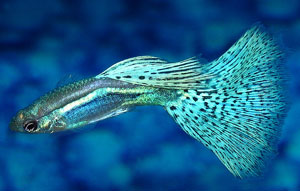 This marvellous guppy fish is a beauty, so much so that many aquarists specialise and breed nothing else but guppies. It is the species obtained, and no matter how far advanced the aquarist becomes, guppies will be in collection.

To describe the coloration would be an impossibility, for rarely, if ever, are two marked the – in , for this reason, also rainbow fish.

The male only is the possessor of this colouring, which be any combination of blue, green, yellow, and red, with characteristic dark markings superimposed, including a dark spot about midway along the side of the body, or on the dorsal fin, both.

The dorsal fin varies greatly in length, it is comparatively short in length, at other times it streams out over the tail.

The average length of the male is 1.5 inch, but the female is larger, up to 2.5 inch, and in no way does she resemble the male in coloration. Her body colour is fishy silver, which tinged with colour depending upon breeding. For instance, the golden guppy female has a suffusion of pale orange covering the body.

The main attraction of the guppy is its adaptability. Very hardy, it can stand wide ranges of temperatures. It has other virtues – it is to feed, it can stand overcrowding, it is not pugnacious or timid, it is a prolific breeder, young mature rapidly. The last is a asset to those interested in breeding strains. The caudal fin varies considerably in shape from a full round to a top or bottom sword. These swords are, in , actual extensions of the fins, and stream out behind the fish.

In Britain, the Guppy Breeders’ Society is devoted solely to this colourful fish. It publishes its own magazine, and it has been established that over 200,000 in the United Kingdom guppies.

the guppy can stand wide temperature ranges, no attempt should be made to them under any conditions other than tropical. Their breeding period is considerably lengthened with lower temperatures, and accelerated by high temperatures (by high, 80°F is intended). Frequent feeding of smallish amounts is than one feed a day, and live foods should be included in the diet.

The number of young can vary from six to sixty depending upon size and condition.