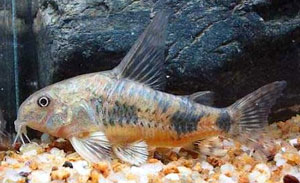 Corydoras paleatus could be bred, but might prove inconsistent. To have any success at all, the initial consideration should be the condition of the fish. Usually, the catfish are regarded as scavengers, and very rightly, but fish intended for breeding should not be considered so. Separate them and feed in the usual manner for breeding. Daphnia, tubifex etc. are the very best foods for this purpose. In reality, lots of live foods should be provided.

The breeding tank should be an established one and thickly planted at one end with Sagittaria. The tank should have a capacity of 8-10 gallons and have a fair layer of ‘mulm’ on the bottom.
Sexing isn’t simple, but the most dependable sign is that the female is much more round and full bodied.

As the female approaches a condition conducive to breeding, her belly takes on a reddish hue and also the initial ray of the pectoral fin also reddens. The initial indication that spawning is likely to happen is when the male repeatedly swims over the back of the female, just touching her with his barbels.

Later the pair appears to embrace, the male nearly on his back, the female in a right-angle position. They remain in this position for possibly 30 seconds, then break away to swim very independently. The female, upon close inspection, can now be seen to carry about four eggs between hex ventral fins. She next looks for a suitable spot to deposit them, carefully going over the plants with her mouth. She then clasps a leaf with her ventral fin and presses the eggs on it to ensure that they adhere. This action is repeated most likely over a period of two hours, resulting in up to a hundred eggs being deposited. Remove the parents.

The eggs hatch in about four days and also the young disappear into the sediment for about two weeks. During this period it is unnecessary to offer food. They’ll feed on the ‘mulm’. If it is impossible to offer the essential ‘mulm’, offer a small paste made from boiled oatmeal.

The breeding temperature is approximately 70° F and also the water slightly alkaline (pH 7.2).